Spurious trips are a major headache for operators and maintenance technicians. First, because they can cause major process upsets. Second, because it can be hard to prove that a trip was indeed spurious and not caused for some other, valid reason.

Consider, as an example, the arrangement of a number of transmitters, on the same line, measuring the same process variable. In this example we can install up to three transmitters. There is a number of ways in which they can be connected… we use the MooN terminology for voting, whereby M “trip” signals must come via N channels for the system to perform the safety function. For instance, “2oo3” voting means that at least two transmitters must measure an unsafe process variable out of an installed total of three transmitters for the loop to trip. In other words: if one of the channels is broken, or stuck in the “safe” position, then the safety function of the system as a whole is not impaired. At the same time, the likelihood of spurious trips is minimised as two channels have to fail in the “safe” state for this to happen. The downside of such a solution is the cost of installing multiple transmitters: 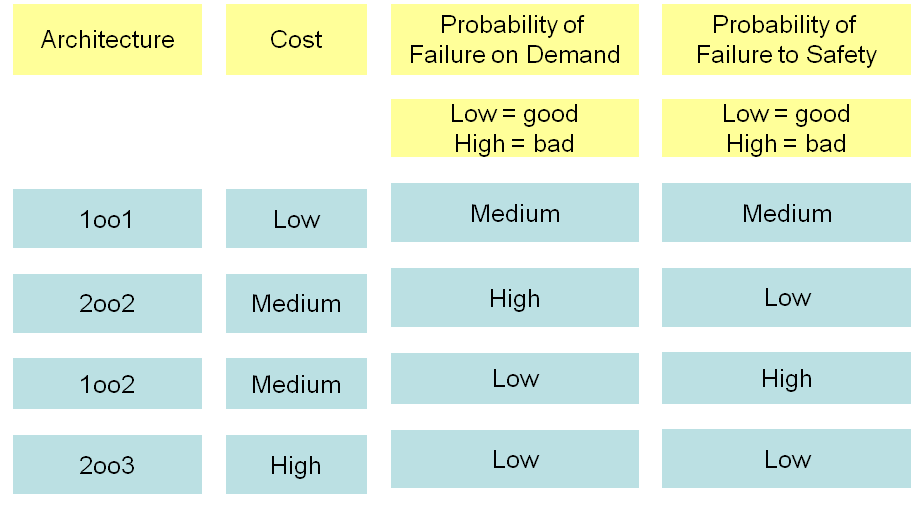 We are aware that in every project there is a trade-off between cost and availability (i.e. lack of spurious trips). We can advise you on the degree of redundancy appropriate for your situation and calculate the improvement you make in terms of Probability of Failure to Safety for each option.